Since 1981 Schwartz Candies has been in three locations. The longest period of time was on Denton Avenue in New Hyde Park, where the business drew its loyal clientele for 15 years. In late October of 1998, during the busy anticipation of the holiday season, Rhoda and Ira received a phone call at home well after midnight. The store was on fire. In a panic, Rhoda, Ira and Stan rushed over to the store, never to see a flame, but to witness the destruction wrought by fire and extinguishing alike. Apparently the workers from the local power authority, in late-night duty on a transformer, reconnected it improperly, leading to thousands of volts shooting down the line, sparking a blaze at the center of the enrobing machine.

The fire was devastating, though by good fortune no one was hurt. It put Schwartz Candies out of business for almost a year. But the store reopened in its Denton Avenue location after a remarkable cleaning and renovation. Soon after, Ira and Rhoda's son, Stan, joined them at the store. Stan learned the skill of candy making from his father, and has been in the business for 20 years. In 2004, Schwartz Candies closed its doors once again, while it searched for new premises. Now the store is firmly and comfortably ensconced in Carle Place, Long Island, and this year the business is celebrating its 79th anniversary.

Schwartz Candies has been a family business, but family is only a part of its endurance.  Many employees over the years have kept us going through the long hours and the days without break during the holiday season.  Without the loyal caring help and hard work of those people, we would not have made it this far.  Unbounded thanks to them and to all our loyal customers, many of whom still mention childhood memories of 72nd Street.  Onward! 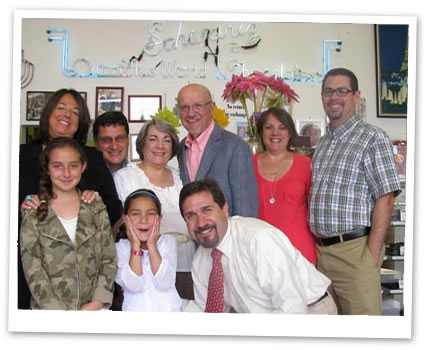